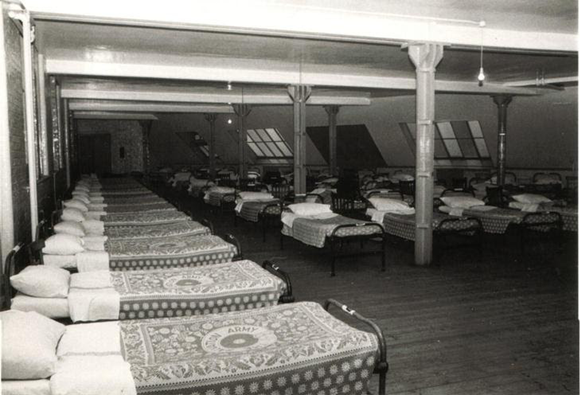 An excerpt from Chapter 6 of 50 Years of Hard Road by Nick Charles MBE.

I cannot begin to imagine what modern-day health and hygiene inspectors would have made of the many hostels I frequented. However, to people like me, they were an absolute godsend. Street people typically take a while to degenerate to sleeping rough in dreadful and unimaginable conditions. You rarely go from central heating and well-equipped bathrooms to a 6´ x 2´ rectangle under a viaduct, or scrunched up double in a shop doorway. It is a slow journey where conditions deteriorate without you realising it. After either of these options, the hostels of the day were palaces, and not as cold or dangerous as doorways or park benches.

They were, after all, refuges for life’s casualties. They were better than a cold and painful death, alone and discarded by humanity, although only just. The hostel that Dr Weiser got me back into was a building that housed two hundred and fifty men and boasted six toilets, two baths with taps hanging off, and one shower, which was only capable of dripping slowly.

At dinnertime, served in a vast area down two flights of stairs in what had once been a cellar (and which smelt like busy urinals), I met Sam and Dave, two street buskers who admitted to being hooked on heroin and weed. They asked me warily if I had any good drug connections. I shook my head, said I was sorry, and explained my poison was booze.

‘Yeah, booze kills me too, and I think I’ve done summat to my stomach. I went through a patch when I drank Polish stuff made from industrial polish by murdering bastards who too often kill off their customers with the first sale.’

It was Sam who had spoken. He was studying me as if trying to decide if I was trustworthy, or perhaps able to contribute to their next cause, whatever that happened to be. I nodded down at their guitar cases which were propped up by an empty chair.

‘I suppose you ain’t got a spare one of those?’ They both looked at me with fresh interest.

‘Do you play?’ This time it was Dave.

I needed to tread carefully; this could go either way. Frequently a turf war existed at places where lucrative cash could be picked up, and I wasn’t looking for trouble. The problem was I’d been a professional singer in another life and I was good, at least I had been, and now – even on a bad day – I could run rings around their kind.

‘Yeah, I do, but I’m probably not up to your standard. I could help out though if it earns me a few quid,’ I offered with false modesty.

Sam reached forward, picked up one of the cases and handed it to me.

‘Play us a riff or two and then sing summat country.’ They both sat back in their chairs and stared at me expectantly.

The instrument was crap and way out of tune, but I had a middle C etched deep into my brain and soon got it shipshape. Then I pulled back from the standard set by the last big band I’d fronted, did a fancy intro, and gave a verse of country rock. Even at this well-below par performance, they failed to hide their excitement.

‘We can definitely pull some dough! You sing and we’ll go round with our hats. Is a three-way split okay? Sam was good to go, and Dave was nodding furiously. I said I was happy with the arrangement and asked about the venue.

‘You make it sound like a bloody cabaret booking,’ Sam was grinning broadly. If there had been a hint of hostility in the early exchanges, there was no sign of it now; it was as though we had been friends for a lifetime.

‘Tube stations work, Tower Hill too. There are tourists there even this time of year, and the Americans are loaded and generous,’ Dave sounded confident and got to his feet. ‘C’mon, let’s make a move,’ he added.

‘I’ve got a hospital appointment at 1pm tomorrow, so I can only do till 12.30pm. Shall we call it a trial run?’ They were disappointed but accepted it had to be that way.

We headed up the first of the two flights of stairs, and as we turned a corner to negotiate the second flight, we had to walk in single file in order to pass by a bundle of rags that suddenly moved. I flinched instinctively and Sam chuckled. ‘It’s only Johnny Two Gobs. He’s harmless.’ I looked back and for the first time saw a head which appeared to be resting solitarily on top of the pile of rags which I know realised were his clothes. The head had eyes that bore a haunted expression made worse by a large piece of bloodied and discoloured sticking plaster covering one cheek.

I was now playing catch-up as Sam and Dave had moved a few paces ahead of me while I had been studying the cause of our encounter.

‘Kind of sad,’ said Dave, ‘He’s got some sort of cancer from drinking crap. It’s eaten a hole in his cheek and he’s refused treatment although it has been offered. When he eats, he has to hold the food in from the outside with the palm of his hand until he swallows it. He’s not allowed to eat with the rest of us cos of the mess it makes, so he sits there until we’ve all finished and then they allow him in and give him squares of newspaper to clear up afterwards.’

Learn more about this outstanding book >>>