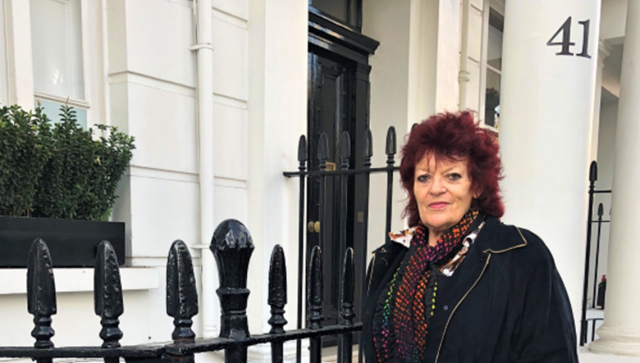 Dana Gillespie is one of the UK’s top Blues singers, gigging in the UK and Europe regularly, and with more than 50 albums under her belt.

She has also appeared on West End stages in productions such as Jesus Christ Superstar, plus numerous movies, including the cult classic The Hound of the Baskervilles with Peter Cook and Dudley Moore.

But let’s rewind to the beginning.

I was born at 12.15 am on March 30th, 1949, in Woking Hospital, Surrey, to Anne (nee Buxton), and Dr. Henry Gillespie, and was named Richenda Antoinette de Winterstein Gillespie.

I sometimes wonder if we choose our parents, as there is no doubt that I was incredibly lucky with mine. My mother was gracious and kind to all, and my father was a fascinating, gregarious, and often womanising man. From these two wonderful liberal characters, I learned how to live my life without too much interference, and with virtually no restraints.

For anyone who knows Dana’s life story, this last sentence will resonate! Back to her parents…

Judging from early photographs, my mother was a large-busted, slim-legged, eye-catching woman. During the War, she was either on a bicycle with a tin bucket on her head for bomb protection, or she was driving ambulances in Holland. Somehow, in the middle of all this madness, she met my father. He was as different as you could get in those difficult days.

For a start, he was a very good-looking Austrian/German, which meant that my mother’s father was horrified at the thought of his daughter marrying the ‘enemy’, especially as they had only known each other for about three weeks. I can only assume that the War made people do impetuous things, as it was rather out of character for my mother to do anything crazy like that. She was always the solid, sensible sort of woman; in her youth, she had been Head Girl at Westonbirt boarding school, and was a Girl Guide with lots of badges on her arms. Yet, here she was, falling for a highly unsuitable man, who was clearly far too attractive and charming to remain faithful for long. Mind you, she probably worked this out after I came into this world.

Growing up quickly in London’s swinging sixties, Dana would get to know the movers and shakers, both professionally and personally. But that’s for another day.

If you want to learn all about the life and times of this amazing, extraordinary, outrageous artiste, check out Weren’t Born a Man.

We’ll just tie things off, here, with a word or two from Elton John.

“Spending time with Dana was very special.  She was magical, and helped me overcome my shyness. She knew my story before I did! All the memories I have of her are fond ones. So much laughter and kindness which helped me enormously. Those brilliant times will never be forgotten.” Sir Elton John