Sustainable Living and the Consumer-Led Movement

HomeUncategorizedSustainable Living and the Consumer-Led Movement 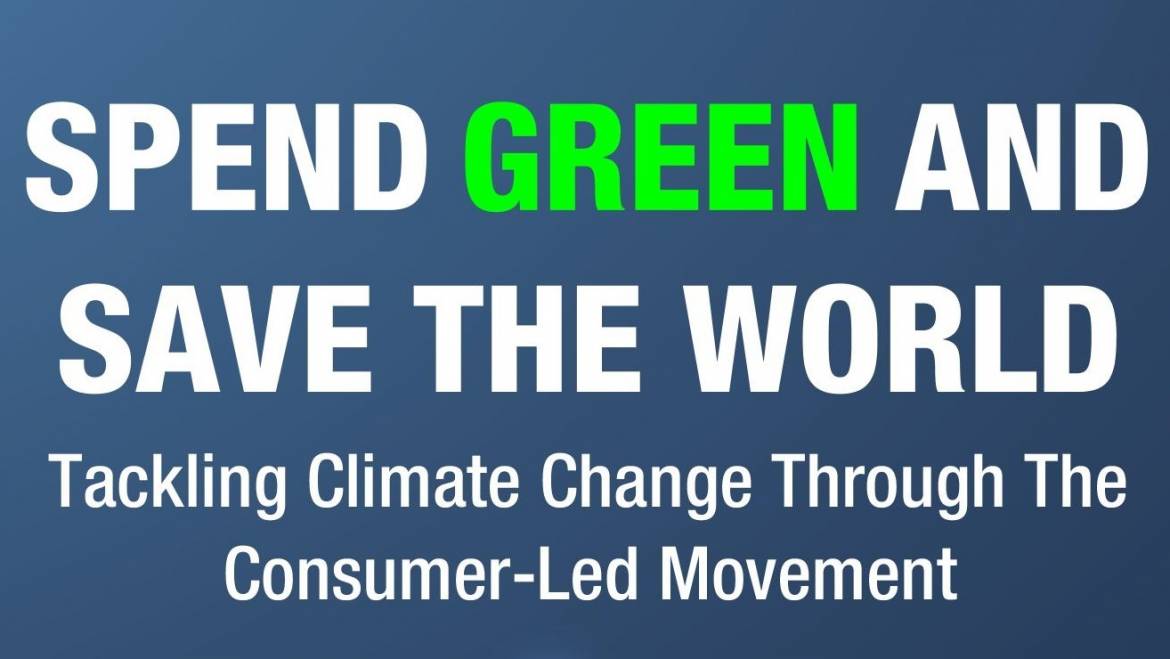 An excerpt from Chapter 1 of: “Spend Green and Save The World: Tackling Climate Change Through The Consumer-Led Movement“

Not using our higher brain capacity has made us forget that we are a part of nature, and that we rely on it to nourish us in every possible way.

Governments and business can make all the changes they like, but they will never be enough to sustain the planet if our personal attitudes – to respect nature for how important and powerful it is – don’t change. If we continue to disrespect our natural environment while governments put environmental repair policies in place, governments will always have to fix the issues caused by billions of individuals’ disregard for the natural world.

Thus, nature will continue to be plundered until the ecosystems are completely destroyed, and there is truly nothing left. I can’t help thinking that even if humanity found a way to survive under these circumstances – which we’re well on our way toward – it will be a stark and depressing existence.

The good news is that in a system where businesses fight for consumers’ attention to survive, and consumers and businesses influence governments, it is the consumer that holds all the power…

“While consumers have always had the ability to vote with their feet, or with their wallets, they now have more power to influence not only what they buy, but also what others buy. Empowered by social networks and digital devices, consumers are increasingly dictating when, where and how they engage with brands. They have become both critics and creators… expecting to be given the opportunity to shape the products and services they consume.”[i]

We can move towards societal wellbeing and minimise climate change by:

Analysis published in the Journal of Industrial Ecology[ii] showed that consumers are responsible for more than 60 percent of the globe’s greenhouse gas emissions – a figure which is made up from the direct use of carbon like heating our homes, and indirect uses, such as what we buy.

The research states that households have a relatively large degree of control over their consumption, but they often lack accurate and actionable information on how to improve their own environmental performance.

That means it’s our choices that have the most significant impact on climate change. China might be the biggest emissions contributor as a country, but not because the people there are living the lives of Riley on some fossil fuel-burning, luxury lifestyle mission to destroy the planet. It’s because they’re making all the crap that we choose to buy!

One reason we haven’t acted on this as a society so far, is because there’s no tool that brings us together to make our united actions count. It’s hard to believe that you’re making an impact on climate change and influencing society when you think you’re acting alone.

(A minority of) People Power

Making cultural/socio-economic and political shifts happen is quicker and more achievable than you might think. You don’t need every person to adopt a mindset change. A small percentage is all it takes to bring the rest of the community – whether that be local or national – along with them.

The anthropologist Margaret Mead, recipient of the Planetary Citizen of the Year Award in 1978, is quoted as saying, “Never doubt that a small group of thoughtful, committed citizens can change the world: indeed, it’s the only thing that ever has.”[iii]

Recent research by Harvard Professor Erica Chenoweth puts some numbers to this notion. Her research found that for civil resistance to be successful, it takes 3.5 percent of the population to actively participate in a campaign.[iv] And it’s not just talking about taking to the streets for protests.

One example is the consumer boycotts in apartheid-era South Africa in which many black citizens refused to buy products from companies with white owners.[v] The result was an economic crisis among the country’s white elite that contributed to the end of segregation in the early 1990s.

The recent massive turnouts at non-violent climate protests around the world show that millions of people are concerned enough about the crisis to take to the streets. Hundreds of thousands of people were, and still are, involved in several countries, including the UK, where 3.5 percent of the population is 2.3 million people. If hundreds of thousands are taking to the streets, then imagine how many of us – at home – also relate to the cause. A Yale University study in 2019 indicates it is a hell of a lot more than 3.5 percent. In fact, their study on climate change communication found that 72 percent of Americans described climate change as personally important to them.[vi]

Enough of us are ready to put a plan into action, and for it to actually work. Read on to find out how to be one of the people making change happen.

And for the naysayers out there? Well, the wheels of change are already in motion. Take our mindset about food, for example. It has already made a massive shift in the last few years for environmental and ethical reasons, completely irrespective of government legislation. As a Forbes article detailing meat consumption explains, “Meat substitutes were projected to account for less than $2 billion of the projected total [retail sales of meat, poultry, and meat substitutes]. Wrong. The actual number was $4.63 billion in 2019. [Studies have underestimated] just how quickly meat substitutes are rising.”[vii]

When we get together, even inadvertently, we can, and do, make a huge difference!

[i] The Deloitte Consumer Review – The growing power of consumers. Deloitte. https://www2.deloitte.com/content/dam/Deloitte/uk/Documents/consumer-business/consumer-review-8-the-growing-power-of-consumers.pdf